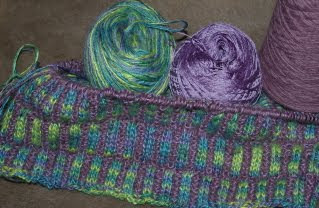 It is still snowing - and with the cold - I am still "blowing" my nose. Anyhow - 2011 has welcomed us in a great way. I just "had" to start the Inspira sweater (based on a cowl that is based on a hat that is based on....Yeah you know what I mean).
The pattern does much better in slow changes of colour like Noro.. but in this case - the yarn picked me - really a wonderful "wet" feeling of silk, mohair, alpaca... but mostly silk. I am in love with it already. Summing up the last year was easy. Facing the fact I have now 50 (including this) unfinished sweaters on the needles, and another 20 hats, mittens, and socks waiting to get done have brought me to my senses! The Resolution for this year is very straight forward - and I intend to honour them - it is my life.

1. Finish my PhD. This is the year it is happening. I finally got the entire thing grasped. It sure will be a party to remember!
2. Finish at least 24 sweaters! This in itself will consume most of my knit time.
3. Increase Gym-time to double of this fall: And watch just a bit more what I eat (portion control).

Then there is a "attempt" or "stretch-goal" as we say it at work: Aim for having not more than 30 WIP's at end of the year.
Note - I am STILL contemplating if I will jump on the February Cast On Mania - that means another 28 new things knitted. So. IF I am doing that - I think a reasonable stretch goal is to get below 50 WIP's....
Posted by Garngamen at 3:50 PM 3 comments: 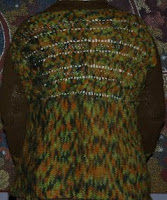 This past year has been about sweaters. And and absolute rotten picture of the 20th and last cardigan will finish the year. This is Leitmotif (it is actually CABLES between the lace-holes)... and knitted sideways. 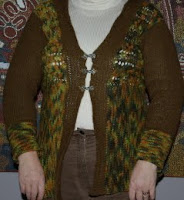 It is two coloured, since I did ran out of yarn. It is knitted in Merino-fur from Naturally (New Zealand), and bought in Penrith outside Sydney, Australia a few years ago. Merino fur really means merino and POSSUM-fur. A banned animal ("pest") in New Zealand, since it kills the local wildlife, so I do not have a bad conscious. It is one-thread, thick and almost "felted" in its appearance. Well, lets have a last look at 2010 before we turn the back on it! I definitely succeeded with the International Sweater a Month Knit-Along (KAL), and after early finishing of the 12, it was easy to go on! I made it to 20 sweaters and cardigans. Very happy about that. Also finished up some remade knits, fixed pockets, reknitted a Bohus sweater. Only manage to finish 3.5 socks, so I definitely missed out on the great StickaMera KAL. I am actually working hard on the october sock "Nemesis" now.

Otherwise it feels like a rather hard working year. The best thing has been moving organization within work, which has finally left me in a state of calm. Also started to work-out at the gym, nothing major, but just enough to regain some strength.

The most fun in the knitting has been the Ravelry group "Village of the Overcommitted" that lured me into a Cast On Mania (COM). Not only once, but twice. It started in the summer with casting on 10 objects as a training camp. In October it went crazy - and I did cast on 31 new sweaters. I mean - totally creative fun. I really got exited about it. I am still knitting on this long list. It is still great fun. And I am already starting to get my mind adjust to the fact that in February - it is COM time again. I thought not to joing, but I could easily start another 10 sweaters, so a list is forming. Anyhow 2010 has been the year where I do feel I master fair-isle (mult-coloured patterns - using 2 or more threads at the same time). I have no problem knitting and cutting anymore, so that is a good thing, since I have casted on a whole lot of new fair-isles. think 2011 will still be the year of finishing all I started. 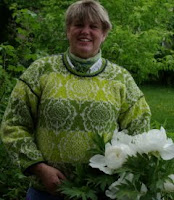 Best yarnshopping: Without a doubt, my San Jose trip. Green-Planet yarn, Yarn Dogs among others. And I am still in love with Lorna's Lace and Noro.

Best Knit-book: I must say New England Knits is ok, but I found the Stephanie Japel's "Fitted knits" to contain many great sweaters...but of course - nothing compares to Poetry of Stitches (Hisdahl) and any Starmore book.

Best Knitting Magazine: Interweave Knits and Vouge (Designer) Knitting are the two top knits. Unfortunately Knitscene is seldom available here. I can only say I am so dissappointed in "The Knitter" from UK - it looks glossy, but fails to produce enough and great patterns - and most are already copies. I am also decided not to buy Yarn Forward, the XRX "The Knitter", and many new rather poor and very overprized knit-magazines. I realize with IK and VK and some spare Knitscene or Knit-simple, I got it all. I would rather have the Japanese Ondori knit-magazine ;-)

Best Knit location: I think Redang in Malaysia top's everything. Knitting the FLS in cotton in the beach will be a memory for antoher decade. That was heaven!
Posted by Garngamen at 1:10 PM 1 comment: