It happens.. things not expected 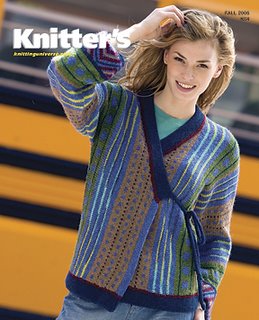 Interesting world. My normal blog-computer had a black-out. Of course, that is where I store all my photos, but even a whiz-kid needs to find the CD (or burn a new one). Well, I whine for my hubby and he is in service - that is my love!(myself had to work on a saturday!) Knitting: Queen Catherine Parr is now moving on, working that bit between the split sleevehole and neck. Upperpart of body. Slowly but surely. Anyhow, I have got my first "job" as a yarn-consultant (that was the last thing my old computer did). Mother-I-L came for a visit, wanting to knit the Knitters Fall front issue. I have translated it, and she wanted better option for yarn than Fantasy (yarnshop in Arvika). So, Time for visit to the YARN-consultant in the yarn city of Stockholm (us!). 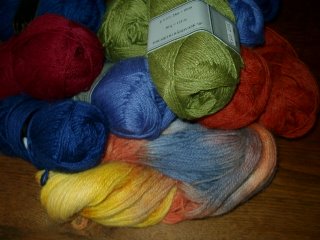 It would be an easy find (ha!). Inca is not available in Sweden (and hard to get this exact thickness of alpacka too), and those colours, I swear, if you surf on the brownish, it looks like beige, so something is so wrong here. Also those little mixed colours in-between? Wow, what a challenge. After going through what M-I-L really wanted, the plain alpacka is a bit on the warm side. And she wanted smaller than small (petite!). Interesting, I do the opposite, add on to make patterns fit, and she has a discussion on what to take out. Also, she really thought those straigt sleeves were way to big. And she started them on straight needles.. (it is three threads...). 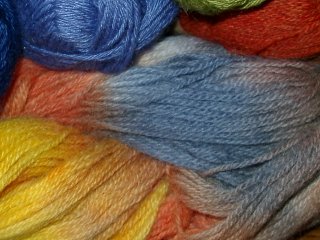 Of course she is a master knitter. We went to Nysta, and she had Du Store Alpakka - Baby silk (30% silk and 70 alpacka) in just the right gree and darkblue. Now the medium blue became a great purple (you will see), Red we found a Garnstudio one, and the orange brownish is also Garnstudio. But that mix. In Sweden - there is just one place to go. Maria's garn. She hand colours, and it did not take long to find a hank that just beautifully captures all colors. (the one on the bottom). Not as in the original, but still. Of course MIL is already going at it. But three colours back and forth. Hmm requires circular on the cuff, and than back to two straight (the pattern looks fun!) This experience really gave me perspective. 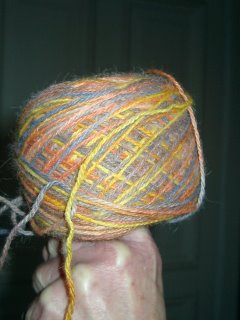 The amount of yarn for a small/petite is the same as two sleeves for me (ok, maybe a little exaggerating), No wonder that supersize takes some time. Secondly, it was as fun to chase for me as it was for her. "If you need a yarn consultant - I talk you there!" So look at the difference of the yarn unwind and wind. Well, A yarn consultant also creates balls!
But, when dropping them off for a walk in the city I just HAD to stop at Warp and Wäft. So close to home, such a great person owning it. I wen beserk. Got this Green bug, and got almost anything knittable in the colour-range Green - including silk, Silla, Villa, Fia, Ulla, and whole bunch of Finish thin yarn mostly merino - silk mixes. I smuggled this bright paper bags in the back of my yarn room, and felt guilty. But it was just GREAT. 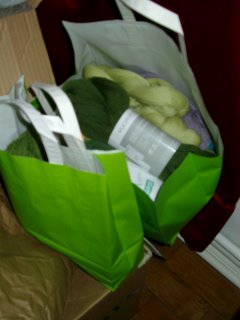 Are you curious what I bought? Im, but trying to sneak off and take a photo didn't work. I got only one that gives a hint that the bag color is the same as the content. And Two bags. That says it all. 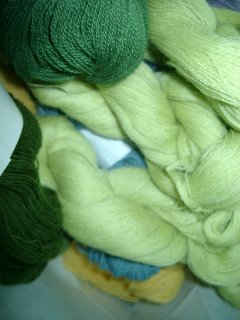 Anyhow, this was just a big longing for the spring. It is so winter here. The fire is burning in the stove. Outside it is -15 Celcius. The birds look like balls. And I have a lot of insulation in my yarn room. No, it is not a STASH, it is a COLLECTION. I Collect yarn. But I promise I go outside and try and get some better pictures tomorrow. Anyhow. Did I really go to three yarnstores and not buy more than Two bags? Of course. Yarnshops should be supported. What about this golden hank? Ahhh! Silk! Ahhh. 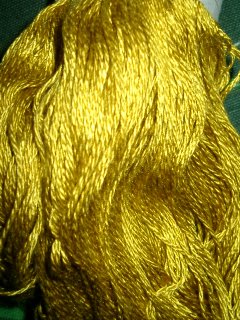 Now it is back to knit again! In Supersize. Queen Parr. This golden had been golden in her. My NEXT queen will have it. Maybe. I definitely going to do an edging in gold in some nice wool And, It should be royal blue. I realized Im so into green and I really lack good blue in my yarn collection. But I have Eyes sensetive to green (which is a great Swedish song: Ögon, känsliga för grönt). So it is a green Queen.
And thanks for all cheers, the caps are new. All sweaters are "old stuff". Guess it is a hard job to keep an advanced blogging audience alive. How do you do it? I noticed my Pentax Optio 330 was rated as an "OLD" camera... so maybe that is one of the solutions. Better picturs!
Posted by Garngamen at 11:24 AM 2 comments: