More ramblings from a coughing knitter 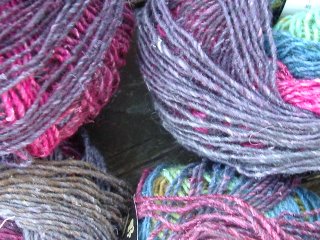 So, I thought I was well, but it was just a temporary relief. Now Im coughing bad and have no breath at all, but yet I have been working since Tuesday. Wednesday was a maraton, and I did the fatal mistake and lost all work (temporary mail attachment). Ok, then I rushed to the train (X2000) to Lund which is a fast speed train. missed eating. No information and took a change to run and grab a bruger. Well, after 1 hour 30 minutes, the train left (signalling faults - which I KNOW are badly tested systems, but might not be this main reason). So, got sick on the train. Ripped up 2 days work to reknit the christmas calender (had missed the border). 11.30 at hotel in Lund. Raining horisontally. Couldnt sleep until 4 o clock in the morning (stress? sick?) Worked like a dog all day and missed train home on thursday Took the later train that takes one hour longer. Knitted back the new pattern. Realized that we all have interpret "repeat pattern 3 times" differently. I thought it was on height. 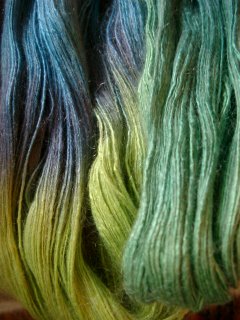 Ahh. Still stuck on day 4. The train didn't stop in Stockholm south (where my hubby was waiting) but he had to go to central. Felt really sick. Realized that is the train that causes sea-sickness!!! But got home to a christmas-lit house (Ohh, I just luve him so much!) Slept like a log and have worked from 8.30 to 7.30 (to compensate for my bad tuesday). And Here I am. Feeling exhausted on a friday. So, positive: Is "Sticka med Kaffe Fasset" a good book? Well, it is his usual patterns with some added knitting patters in a much smaller size thus makeable. I like it. Eva Wincent is clever. But his best book is his pattern book in my point of view. More positive: Santa wishlist: 1. MX5 Mazda Miata (modest isn't it ;-) 2. a step-meter (yes, that exercise should have a kick) and of course I would luve any gear tricking me into exercise: Rollerblades, jumping mat, balance ball, jumping rope, hula loop, any machine in that area. 3. A vibrating massage chair (do they exist in Sweden?) 4. Any Spa visit and papering (you see a theme?) Hmm. Lets have a Knitting wish list:
1. Possum fibre (as pure as possible) or yarn
2. Buffalo/bison fibre or yarn (hey for a SWEATER, not a meager scarf!)
3. Order in my yarnroom (glass shelfs) and inventory in a list with all items...(you know nr of stiches per 10 cm/inch, needle size suggested, content etc) yardage/meters colour nr etc...
4. Denise needles (seems to be a good idea)
5. Any Kochoran, silk garn or Cash Iroha yarn (Go Noro Go!)
6. Cashmere yarn from Maria G. (hey, Im picky!)
7. Going to a Stiches event in US!
8. Have a yarn vacation to US!
ok now Im flipping out again.Diving back in a more relaxing knit. or just Blog around and see what you are up to out there!
Posted by Garngamen at 9:01 PM 3 comments: 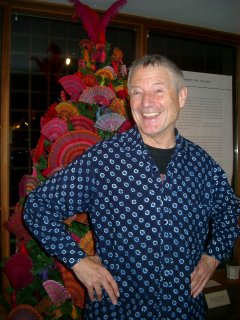 Kaffe Fasset in person. Live!
He is an artist, and reminds me in many ways of my fantastic uncle Alf. Charistmatic, self fulfilling, enough, content with life, meeting people all over the world, making the world a better, nicer more colourful way. A downplayed gay that can charm any audience. My uncle died of Aids at age 52 and has been the most influential person in my life - being both my mother and father and a great gestalt therapist. Well, Kaffe had that same aura. It made me happy. It made me sad. I just wanted to spend and evening talking about life with him. But who am I to compete with 100 some women? If I were a man, I would have won. Anyway he signed my bookes (Pattern library is great!) 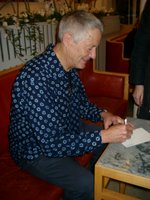 and the new swedish Kaffe book with some more real patterns from Eva Wincent (who actually knits them her self). Well, I told him that he was missing out on the knitting boom. He is of course always looking for money New knitting book coming out next year. His friend Brandon is also coming out with a new knitting book. So interesting - my head mix. Also both Alf and Kaffe could irritate you. Easily. But, somehow Im draw to narcissistic self proclaimed masters. Anyhow. I was not allowed to take my very Cerise knitting into the place (I just so guessed that this was his colour). He rambled on like a great entertainer on how he gets his inspiration. From colour. From patterns. From everything everywhere, specielly in contrast. He copies, moves to new materials and plays and tryes the mixes out. He can extract it out from anything. Last questions of many "how do you think when you get your inspiration"? Duh! He just talked an hour about it. 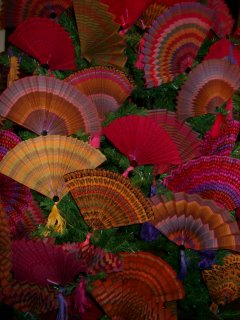 And, I think either you see it or you don't. Of course, Im born into a artistic family. It is easy for me to say, but my brother suggested the simplest trick about modern art that actually tought me something. You don't interpret, you don't guess what the artist was trying to say. You do not judge. You just FEEL. Either you feel for it or you do not. Then you know, after a while. What looks good for YOU. What you can stare at for hours, and what just leavs you empty. So!
What about it? Have a look at the Christmas tree Kaffe version. Jepp, just fabric on paper, folded with some wire. Finally a comment comment: Dearest Barbro. It must have been a long time since you cuddled a horse! Ok, Cow-hair (body) are a bit stiffer, but My horses (which I cut their winter fur) was just so cuddly soft, well, not like quivit, not like angora, but somewhere in the vicinity. Short as you say. but not as short as a fullblood, or short haired. That is summer fur. But I have not got it pure. Ohh, BISON is of course on my list of fiber wanted.
Links are welcome (Hey Santa, hint hint! ;-) Hmm Great theme for next days. Santa wish!
Posted by Garngamen at 10:53 PM 3 comments: 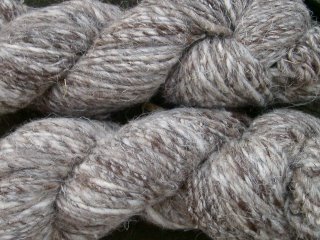 This is yak-yarn. During a conversation on Sticklistan (Sticklistan@kanalen.org), I mistakenly read that someone was on the hunt for yak yarn. That was not at all the case. Rome yarn stores (was it?) is not particularly into Yak to my knowledge. We all had a laugh about it, and still do (I sort of said "if your find yak yarn, buy it for me, and I pay you whatever you feel is fair"). No Yak's on Rome streets. And No Polarbears in Stockholm either. But I bet polarbears (no let them live!) would spin a great yarn. The net bring most yarns to our clickety-click fingertips. But as you all know IT IS THE HUNT! Anyhow, I just couldn't resist the opportunity when it was on the yarn list of Fuzzy Mable. I just thought it might be something like Quivit (swe: Myskoxe). Nope it is not. This yarn COULD be any sheep. maybe a little mohair-goat twist to it. But definitely far from Quivit. And I have it. It had no brand, so I have no idea how much blend or pure it is. But, I assume some mix. I think Yak is more similar to cows or horses (no, not their tails or mane hair). The fuzzy stuff. I now own YAK, QUIVIT, Camel, Cashmere, Angora, alpaca, mohair, all sorts of wool, human hair (the latter fiber great for water-resistance and durability in for example sole's in a sock or mittens for fishermen). In the living family. 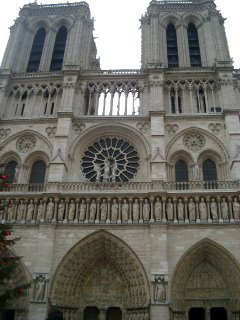 What I miss is: Possum yarn. No, no possums in Notre Dame ;-) Possums are a great memory from my time in Melbourne in Australia.We had one in our roof, and 12 every night it jumped on our tin roof and scared/woke/angered us every night. So that is on my list, as pure as possible. Of course I would luve to try out guanaco (was that right, it sounds like guano ;-) and other Lama-relatives. Any fiber I'm seriously missing? (I do not count silk as HAIR!). of course dog and cat, but Im allergic to dogs... And it is raining like 'em today.
Posted by Garngamen at 6:00 PM 2 comments: 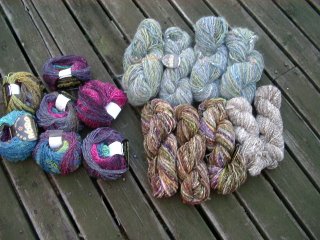 I guess people are busy in the weekend. Im so addicted to comments. I luve them. So, after email with Interview Knitting, the winter number would be here until 3 of January. Hey, Sweden is not the end of the world? It takes 20 minutes for Fuglesang (the first Swede in Space) to reach Stockholm from Florida! I saw him take of tonite. And today it is Nobel-prize day. I really felt the Peace prize was decerving. Micro-economics. 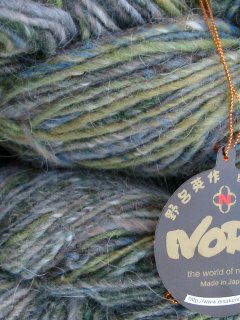 Give the money to responsible women. Well in my family, my hubby is the most responsible one with money.. Without him, I would have spent it all. Now I only flip out on yarn. It is limited damage in my busy life. The 10 year old dime-tap flue from Oz (yepp, live there then) works wonders, and I got my hearing back. It is rather difficult to communicate with the head in a bucket. 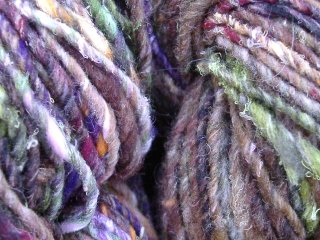 Anyhow, still recovering but Im over the peak. Yarn stories? OK. Lets look at what happened after inspiration from When the going gets tough the tough get knitting! November 7 posting. Of course I linked to Fuzzy Mable and bought a lot of Noro! 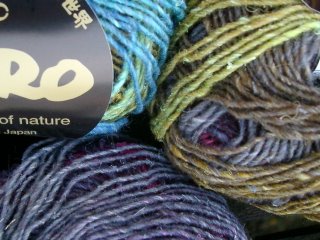 First, Pictures from top. My package. Cheap uniil Swedish tax and customs added 40%, now more expensive than if bought in Sweden. Second close up of the Kochoran nr 41 (4) to complete my other Kochoran from Nysta. Then r Iro (I have not a clue what to do with this yarn, in maturing pile ;-) But colours are GREAT. And finally here is the novelty, the new Noro LIGHT silk garden. I think it is faboulus. I have no idea what to do, but finally a thin yarn. It will be GREAT! It will take another year (!) until it reaches the shops in Sweden according to Nina (Nysta!). The last very natural white I will give a posting about tomorrow. It is a story in itself. Opps also forgot to mention my friend Marika in Stickigt got mentioned by the Swedish fashionista. Too bad Im writing in English, a string of jealousy there. But hey, she is GREAT, and she also started the Faroese shawl KAL

- I can always join a KAL with no dates... I said
with NO dates. Just join - of course all in Swedish. But she has got great pictures!
Posted by Garngamen at 1:31 PM 3 comments: