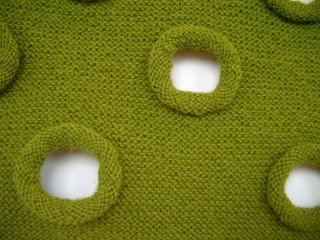 So, half of my knitting bunch showed up. And we explored my collection of knitting books that has really grown lately.We discussed patterns, discussed yarns, bitch a bout the content of acrylics in Rowan yarns "renamed to "microfich" - We enjoyed the true Ås knitting yarn colourscheme. We looked at Socks, smart hand made cords (not Icords - in swedish påtade) and BY HAND. I have a machine for that!. Beautiful!. We admired a corksrew shawl and the drops alpacka wrap sweater from Yll and Tyll. We had food, lattes and bun. And we discussed our beloved teacher Britt-Marie Christoffersson (her pattern on the picture!), who is kicked out of her studio where she lived for many many years. Ahh, I really like them a lot. We all agreed that Latvian Mitten's book was definitely worth buying, and also Nacy Bush Vintage socks. And then we started to discuss Bohus pattern's sizes and colours. And I had to show my failed Vouge circular sweater. Well, how life is...Now I would like to drop everyting and go back to my yellow lace-collar (white base) cardi in Bohus... Hmm.. finish or start.
Posted by Garngamen at 6:06 PM 2 comments: 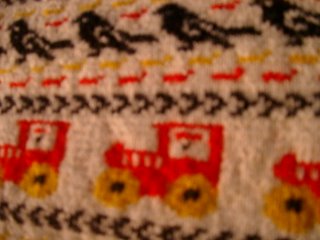 No, it is not my knitting! It is from a sock in Estonia. But, I do feel like the car, and the bird (flu) is flying above us, with spring... Brrmmm My knitting is a mess. My stash is a mess. My knitting books is a mess. My patter is a mess. My organised mind has totally lost it. I think knitting in small size needles are great, a small mistake does not show.. well, it depends on the yarn. But this comes from a promise I have done to myself. I promised I would try to fight my ambitions in my private life. I would allow myself to be disorganised, doing exactly what I please, knit this, knit that, just follow my feeling, no rules, no "must be ready", no knitting for others (if I didn't want to). Ok. and no "be perfect". Especially not for others. 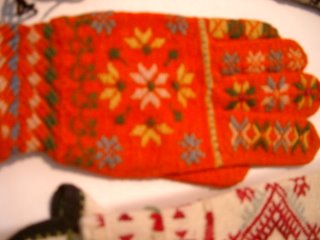 I would like to think that is an evolved thought. But sometimes I hear snickering from others pointing out my mistakes. So, good for them, they are just so much better than me of knitting. I definitely do not want to be best. I just want to have that feeling of knitting. And my largest fear is that I will loose it. By loosing it, I will end up with a yarn room, and my favorite past time gone. So, I guess I will entertain my blog the same way.... Or maybe this confession is still OS post stress syndrome, or pre Latvian mitten syudrome. Take care! I will.
Clicketi Click. My knitting friends coming over - to my knitting mess!
At least we will stich and bitch. That is what friends are for.
Posted by Garngamen at 2:29 AM 7 comments: 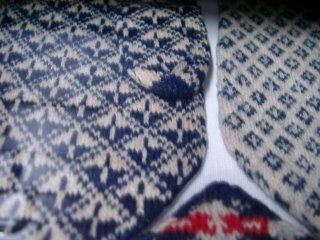 What is happening? Blog was down, I'm down, no comments on my blog, just silence. Just when I thought I was getting so much better (went to work today), my cold just hit back. Muscle aches that are just in the knitting areas. Nose dripping, and my throat. Where is the Ice cream?? Ahh but most of all: Are you out there?
All knitting away? Well, bad conscious got me last evening, (read up on yesterday!) and I finally decided what to do with my summer pattern sweater in Muscat! It is a west now, and I did a neck-opening on one side (shoulder). 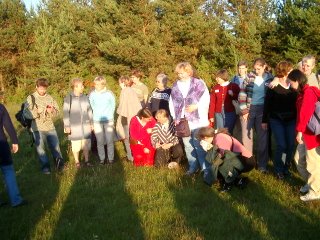 Now I have started the sleeves. Feels great to knit and finish something..... Anyway. All the pictures are happy memories. So called self inflicted happy thoughts (hmm that was not good english!) 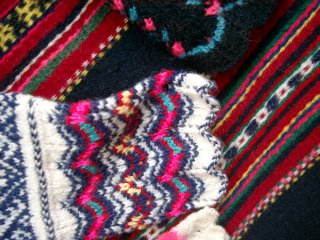 Estonian Mittens on wowen cloth from Kihnu Island. People from the Nordic Knitting Symposium in Estonia 2005.
Posted by Garngamen at 9:41 PM 8 comments: 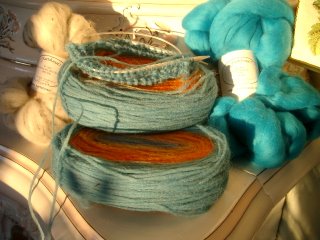 So, I thought I would be spinning more... But, This is UlloMera's cut fleece, that in swedish is called "förgarn" which means Lopi-like ready to be spun!. But Crazy experimenting Barbro, knittet a wonderful cape directly in it. I started, and it was slow, wow how easily it breaks. cast on? Ha, broke and broke..So after some frustrating rows, I did finish my Latvian mitten. And moved on to my Baby-alpacka one (both could be found pictures below). But, I do not have yarn to match the first one, now finished. And the other is still excellent and very time consuming to knit, but perfect for concentration. So, Instead of being a good girl, hey the competition is still far away (17 April), I thought I would visit NK and theur yarn shop. But, that was Saturday, and I felt sicker than the whole week, and I just WANTED to get out... so, in full OS hat, mittens and coat I was dropped off outside Wincent. Goal, to CHECK out their new yarn. Well, Cotton Rope looks great, cotton "Holiday" was weird. The "natural Silk" did not hardly contain any silk (what a fake name!) But I Irritation rose when 100 % Merino Wool was not declaring if it was superwash or not. It sure felt like it. So, It is fashion to mix with microfiber? Well, I had a long discussion why I will not pay for Cash Soft and get fooled by that lushious feel. So, I though! Ha! but then I saw the Rowan Classic Summer, book 11, Cashcotton 4ply sweater Julia, and that green. (Not yet on Rowans own web!) Ahhh, So, fell into that trans, Cotton Angora and just IGNORING all the other sh*t in that yarn, and stayed with the soft beautiful feel and the eyesoothing green colours Ahhhhhh! Totally seduced. Give me a 10 packet. Now! And after waíting around, seeing that wonderful Yokrshire Tweed 4ply, THAT is a quality woolyarn. Wow. So I just have to have the oddballs. Petrol (?)and Graze.. And of course no plan. Why do they not print the NAME of the yarn on the lable? so instead of petrol (my name) it is shade 271 ;-). Getting home, curing my rinning, nose, Attjo, taking something nice for my coldsores on my tounge (!) (gulping Ice-cream! ) And hitting the sofa, I just had to surf around to by 6 more balls of the yorkshire yarn. colour Ocean! Well. Crazy. Crazy. So, It felt like a releaf to cast on 336 stiches on needles 3. Two days now, and I'm almost 3 cm (of 13) on the edge... And it is just so smooth knitting. A joy. So, I had a look at NK today. Surprisingly interesting. Only "Summer yarns" and a Staff that "got the vibe". A lot of glitter, mostly thin yarn, worth to mention is Idena silke yarn and bambo (which will be a hit!). And Rowan, all sesons cotton, kidsilk haze, calmer and much summer tweed. So, all in all, a got place for "boring sundays". So - just must comment on your favorit yarn (and yarn store) ! Or is it spinningtime? Machine-knitting time?
Posted by Garngamen at 3:47 PM No comments: