YARN and some summertime... 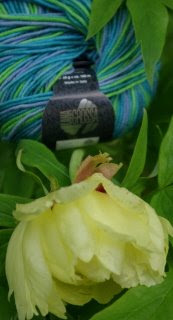 In Vienna I got these two small little cuddly Lana Grossa Merino Print, where only one posed with my sulfur yellow tree-peony.. Thinking socks... or??? just felt so good. 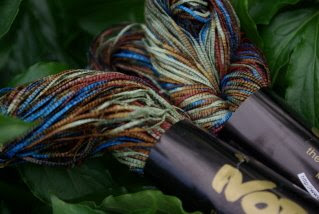 And then the three Noro Ganpi (or is it Ganbi?)
tape, that will make an entire top... It is just wonderfully weird and beautiful. Knit with paper. I wonder if it is washable? But one of those whimsical projects. Ps... The Sacher cake I got as a present was YUMMY!
I also realized that pulling weeds makes my hands a bit sore - which impacts my knitting. But Im in a garden heaven. Roses are fab!
Posted by Garngamen at 7:27 PM 1 comment:

Yarnhunting In Sofia and some in Vienna 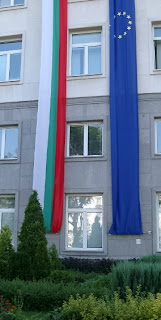 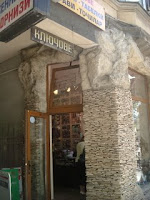 A country which is a cross between Tallin and Rome, well, it is different, unreadable letters for me, making the yarnhunting a bit difficult. In 30 degrees heat (celcius), I did mangage to follow the lead of Ravelry hints - and by accident - the dear lady knitting in my tutorial (the real reason for going to Sofia). Plethe. To Knit. The only question I was asked form the "tech guys" was: What does "knit" mean... I said Plethe.... (of course that is the ONLY word I know in Bulgarian, but nevertheless, the coincedence created a gasp!)So, here is the shop. to the left. A small little place. The inside can be seen. All yarn carefully wrapped in plastic. I mean, no dust or bleaching on it, and no sogging.... so fresh in that respect. But, oh dear what a yarn snob 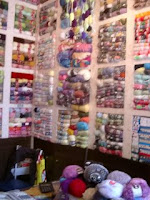 I have become. There is really no words say. The worst in my book. Acrylics, nylon, microfibre and fake fur... ok, I could spot some cotton in there, but colours was the last put off. Im so NOT in sync with the local fashion in Sofia. The sort of young girl was ok, but, no, I could not even find one ball of souvenier yarn, that is how "put off" I got. It was for sure not the money. It was cheap. So thinking of my stash at home, Im going NO NO NO... took a picture and backed out. Poor Sofia knitters. There was another shop, not far from there. But I was one street off, so I had to go back day after - and that was closed for lunch then. So, no, honestly. I know the two shops in Bulgaria, and that did not tickle me at all. But again, I can say nothing about the supernice and friendly Bulgarians. The legal Taxi's (OK) are cheap and great, but there a lot of very expensive "mob" -cabs, so be careful what you step into. Since these cheap and legal cab get so little, I really tip well. That is so much more comforting, than getting ripped. Well, a short flight to Vienna, I realized I had not checked Ravelry or knit-map, and relied on my memory to find the way to Neubau gasse and FE Wolle und Mode. 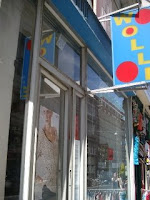 This shop I remembered were filled with goodies, last time, where I definitely got some Lana Grossa yarn. Now, I was panting in the heat, and could not even touch the wool, cashmere but glazed on the cotton...But ended up with some really strange hanks of Noro (?) Ganbi tape - which is basically paper yarn. Really weird. I guess it was the 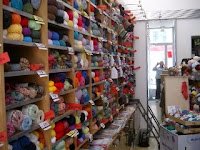 colour that seduced me. Ok, I got some merino throw in for a pair of socks. But really... that was all I had time for, so when later spending time on the free Vienna airport internet, I realized that there definitely are both new and great yarnshops in Vienna. Well, a bit of flight screw-up, worked in my favor going directly home, instead of passing Copenhagen, so Im happy! Only the luggage has still not arrived - so pics of the result of the yarnhunt will come later. Happy midsummer. There is now a short break when it is not raining here, so Im in the garden ;-)
Posted by Garngamen at 12:14 PM No comments: